I’D BEEN LIVING ON MAUI FOR ABOUT a month before discovering the cowboys. Not far up the Haleakala volcano, off Olinda Road, there’s a ragged little rodeo-arena called Oskie Rice, and there they are, all belt buckles and spurs, roping cattle on a quiet hillside barely 30 kilometres from the stacks of beach condos below. When I show up, it’s not a full-out rodeo, but a team-roping competition, which involves two riders working together to lasso the head and hind legs of a steer. The paniolos (Hawaiian for cowboys) are Filipino, Hawaiian, Portuguese, American, or some such combination. There are grown women, a few 11-year-old boys, young moms, and seasoned ranchers with big bellies. Peter Baldwin is probably the oldest one of the bunch at 72. In this event, he is the heeler, so his job is to toss and cinch the rope around the steer’s scurrying feet at the exact right moment. Baldwin is easy to track because of his white beard (close-cut to his round face) and signature aloha shirt (tucked into a pair of dark jeans). He is a substantial man, with skinny legs and a thick middle, but has delicate-looking hands for someone who’s been a cowboy most of his life.

Baldwin comes from five generations of Maui horsemen. In 1888, his great great grandfather, one of island’s early tycoons, bought 30,000 acres on Haleakala and started the first large-scale ranch, joining the Portuguese settlers who were already raising cattle there.

At a cool 3,000 feet, Maui ranch-country is the antithesis of Hawaii stereotypes: a storybook woodland of gnarled Eucalyptus trees instead of palm trees; populated by wild boars, deer and cattle instead of sun-weary vacationers, surfers and hippies. The nearby town of Makawao still feels cowboy-ish with its raised walkways, false-front buildings and remnants of roadside hitching-posts. Today’s Makawao strip has been updated with boutiques and art galleries, but you can still go to a rodeo event at least once a month, and get a decent pair of shit-kickers at the ranch store.

But 50 years before Maui ranching, even before the glory days of the Wild West, cowboys were quietly riding and roping elsewhere in Hawaii. “There were cowboys on the Big Island before they had cowboys in Texas or Oklahoma,” Baldwin tells me. “Not many people know that. They think of Hawaii, they think beaches, palm trees and hotels.”

Hawaii’s foray into ranching, like most human innovation, was urged by necessity and greed. In the 1830s, the Big Island – southeast of Maui – was overrun with thousands of snorting, fearless wild cattle. They tore up sugarcane fields and gardens. Locals were afraid to walk around at night. The trouble started decades earlier when a British explorer named George Vancouver shipped over four Mexican longhorns. He claimed they were a gift to the king, Kamehameha, but more likely he was thinking about all the beef that could re-supply his boat on future voyages.

Vancouver insisted the king declare a kapu (taboo) on killing cattle, so that the small, sickly herd could have the chance to build itself up. For about 30 years they multiplied freely. Before long, they ruled the uplands like a drug cartel, spreading fear and ruin. A major cull was in order, not just to quell the destruction, but also to keep trade flowing. By this time, the island’s sandalwood had been nearly decimated by Pacific traders, and the king had racked up a sizable debt with Americans for all the tailored suits, blue china and wine he’d bought on credit over the years. His plan was to repay them in salt beef. Americans loved the cured meat, and the king was drowning in cattle. It was a win-win situation. 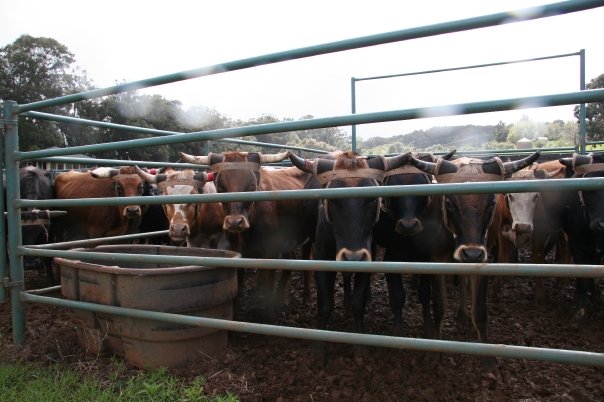 The only glitch was Hawaiians knew nothing about how to get near these wild beasts, which had come to regard humans as cowering idiots. Kamehameha needed reinforcements. He looked to the original cowboys, or vaqueros, from Mexico and California. These roving cattlemen had been herding wild bulls in their homeland for decades, and a few were hired by the king to make cowboys of his men. In time, the Hawaiians became adept horsemen able to chase down a bucking bull and tie its neck to a tree. The vaqueros helped produce some of the toughest and best cowboys around. Years later, Hawaiian paniolos would go to some of the early rodeos in Colorado and Wyoming, and blow everyone away.

Today, ranching, rodeos and cowboy culture exist on all the inhabited Hawaiian islands. (Kauai has an all-girls rodeo.) Every Fourth of July, Maui hosts a state-wide rodeo with all the favourites, like bull-riding and calf-roping. Peter Baldwin, now too creaky for such jarring events, will stick to team-roping, because he doesn’t have to get off his horse. That he is still riding is impressive considering recent knee-replacement surgery and a month in bed last year after a horse stomped on his leg at a competition in California. At Oskie, Baldwin has does well, placing second in the afternoon show. His roping partners have been a rotating crew of locals, some fulltime ranchers, and others just regular folk who grew up riding and, like Baldwin, just can’t get it out of their system.

At a cool 3,000 feet, Maui ranch-country is the antithesis of Hawaii stereotypes: a storybook woodland of gnarled Eucalyptus trees instead of palm trees; populated by wild boars, deer and cattle instead of sun-weary vacationers, surfers and hippies. The nearby town of Makawao still feels cowboy-ish with its raised walkways, false-front buildings and remnants of roadside hitching-posts. Today’s Makawao strip has been updated with boutiques and art galleries, but you can still go to a rodeo event at least once a month, and get a decent pair of shit-kickers at the ranch store.