A Calgary entrepreneur sets up shop in business-friendly Detroit

TO CONVEY THE SPIRIT OF HIS PLAN to make bicycles in Detroit, Zak Pashak feels a tour is in order. At the wheel of his worn Toyota Prius, the 32-year-old entrepreneur narrates as the sprawl of Detroit unfolds, revealing a city broken but not dead. We pass the obvious blights symptomatic of a long-depressed city: rampant vacancy, overgrown land and lots of people sitting on stoops with nothing to do. But there are also signs of life, including a patch of downtown streets that people have taken to walking again and new businesses spun from an emergent entrepreneurial spirit. Local leaders are hoping these seeds will help to pull the city out of its 40-year funk. It was partly this spirit, partly an “irrational fascination with Michigan” and partly a need for change that drew Pashak to the Motor City from his hometown of Calgary two years ago. END_OF_DOCUMENT_TOKEN_TO_BE_REPLACED 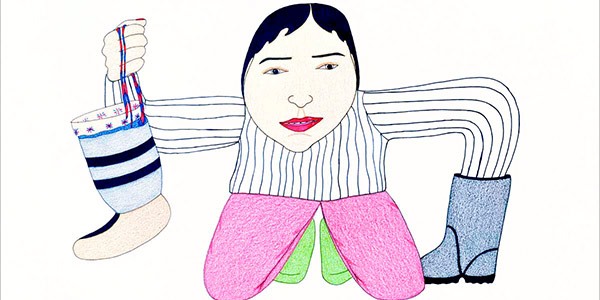 She shot to fame, then vanished just as quickly. What happened to Nunavut’s greatest modern artist ?

MY SEARCH FOR ANNIE POOTOOGOOK begins at Feheley Fine Arts, an elegant red-brick gallery in downtown Toronto that deals in high-end Inuit art. The owner, Patricia Feheley, is a veteran in this business. Slight and stylish, she has the refined air you’d expect of a gallery owner. She became one of Pootoogook’s most fervent champions as soon as she laid eyes on the artist’s ink-and-crayon drawings in Cape Dorset more than a decade ago. She recalls going “absolutely crazy” for them: “It was the base honesty. She was drawing exactly what she wanted; she didn’t care what other people were doing.” The images offered a blunt, sometimes jarring, portrayal of modern life in an Arctic settlement: Ski-Doos and Coleman stoves, TV and sex, alcohol and domestic abuse. The style was fresh, uninhibited, modern. There were no dancing bears; none of the trite themes that the Inuit art industry has long relied on. Giddy with her discovery, Feheley left Cape Dorset with half-a-dozen of Pootoogook’s drawings, which she showed in an exhibition called “The Unexpected.” The pictures were a hit and all of them sold. Over the next few years, Pootoogook’s work would catch the eye of the contemporary art world and rocket the young artist to fame. END_OF_DOCUMENT_TOKEN_TO_BE_REPLACED

APART FROM WHERE HE GREW UP, Randy Kataluk is a typical 22-year-old. He plays the electric guitar and pretty much any sport. He loves Metallica and the Leafs. He is also from Coral Harbour, Nunavut, a community of 800 people on Southampton Island at the top of Hudson Bay. Like most Arctic settlements, Coral Harbour is only accessible by plane, prone to blizzards and offers basic services — a health centre, a grocery store, a two-person RCMP detachment, a couple of churches. Jobs here are scarce. END_OF_DOCUMENT_TOKEN_TO_BE_REPLACED

Inuit are the least urbanized of aboriginal groups – less than 20 percent live in an urban centre – more are now moving to cities, a modern migration that seems inevitable and, some would say, even necessary.

WHEN YOU CONSIDER WHERE RHODA INNUKSUK was born, it seems remarkable that she now lives in a three-bedroom brick house on a leafy street in suburban Ottawa, where her 12-year-old adopted son and his friends are currently holed up in the living room playing Rock Band. A selection of classic-rock staples howls through the kitchen as Innuksuk prepares a pot of coffee. “Forgive the mess,” she says, referring to the boxes piled by the door. She has been sorting through winter clothes in preparation for a trip to Qaiqsut, an ancient hunting camp near Igloolik, Nunavut, where she was born in a tent while her father was out walrus hunting. That was in 1952, sometime in August – her exact birth date is unknown. END_OF_DOCUMENT_TOKEN_TO_BE_REPLACED

Why a Francophone circus performer moved to Igloolik, Nunavut to build a troupe at the top of the world

IGLOOLIK’S COMMUNITY POOL IS A CONCRETE PIT littered with lumber scraps and a peculiar number of legless foosball tables. It has the chilled air of a cellar and the oppressive lights of a prison. It also happens to be the only place for circus practice. The instructor is 36-year-old Guillaume Saladin, a francophone acrobat who is flitting around the pool with the haste of someone unprepared for guests. Still in his coat, he kicks aside rubble to make room for a few battered gym-mats. END_OF_DOCUMENT_TOKEN_TO_BE_REPLACED

NWT’s music darling Leela Gilday talks about her new album, winning a Juno, and the perks and perils of being an aboriginal artist

ON A COOL NIGHT AT A PUB IN HANOI, VIETNAM, Leela Gilday rekindled an old love. It was jam night at The Labyrinth, a popular tourist bar in the city’s Old Quarter. She knew a pile of people and they all sang and played guitar until 2 a.m. Warmed by the place and the spirit of the night, Gilday decided then that she couldn’t quit playing music. “To my immense relief, I seem to have found my passion again,” she later wrote in her email travelogue. “I do want to be a musician.” END_OF_DOCUMENT_TOKEN_TO_BE_REPLACED

With clean, modern designs, architects Jack Kobayashi and Antonio Zedda — aka KZA — are dragging the Yukon out of the gold rush

AMID A SEA OF BEIGE SIDING AND TWO-CAR GARAGES, Jack Kobayashi’s house emerges like a towering middle finger. “It’s a little bit in your face,” he concedes as we pull into the driveway. Half his squarish duplex is a matte grey with an odd, jutting yellow panel and matching door; the other side is a windowed Kensington-blue with a red door. Kobayashi’s home is a nervy response to the blandness of neighbouring dwellings in Whitehorse’s latest suburb, and a reminder that houses needn’t look like they came off a conveyor belt. END_OF_DOCUMENT_TOKEN_TO_BE_REPLACED